"The letter music notes and weather notes that were done down there reached a point where you didn't need to kill a person. The piece itself became a weapon: the letter itself. So fame was the most interesting to take out. How do you know George Washington? You know him through a name. You shoot the letter on the train at the other name and it takes out that name. So therefore homeboy has no identity. Why should I kill him? He'll just be dead anyway because nobody will know who he is. He'll just be a walking zombie."

-Rammellzee, interview with Greg Tate in The Wire
Posted by Unknown at 12:17 PM No comments:

Last night I caught Inception, the new Christopher Nolan movie. I was a huge (HUGE) admirer of The Dark Knight, and Nolan here seems poised to deliver a similar mix of brainy contemplation and extreme action (spoiler alert). Inception asks the profound question – what if this is all just a dream? Whoah, dude, I know. As a core question, this would compare poorly to The Dark Knight's ideas about law and order, chaos, and the nature of human motivation (“Some men just want to watch the world burn.”) Luckily, the whole 'dreaming' thing is more a premise, and Inception puts its intellectual focus on DiCaprio's tortured relationship to the memory of his dead wife (as much as I like Leo, I notice the word 'tortured' captures pretty much all of his performances). Ultimately, even though that takes up easily a quarter of the movie, those issues make up a subplot that never quite ties into the main thrust of the action. And it's a convoluted, borderline nonsensical subplot at that – if something is this complicated, it's hard to make it resonate emotionally. 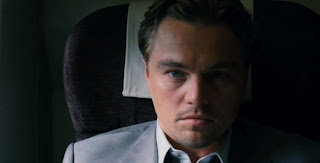 By contrast, the actual motive for the film's events is dispensed with in, no joke, about three sentences. DiCaprio's character, using dream-manipulation technology, must convince the young heir of an energy empire to break up the company to prevent it from gaining a monopoly. The sad irony is that, if Nolan were less clearly obsessed with becoming some kind of auteur, that's all we would have needed, because at its best, Inception is an incredibly fun and radically inventive action film. The comparisons to The Matrix are inevitable, but while The Matrix got nonsensical real fast, the joy of the action in Inception is that Nolan sets up some fairly clear rules about how things work, rules that come into play in absolutely dizzying ways as the film heats up. These are, mainly: A person's subconscious generates aggressive 'projections' that will defend against mental intruders. In order to get out of the dream, you have to be given a 'kick' by someone in the real world (or, as we proceed, whatever dream level you're sleeping in), something to trigger the sensation of falling. And finally, the deeper you dream, the faster your brain works, and thus the slower dream-time moves relative to real world time.

These don't correspond to anything we know now about dreaming, but they end up being their own reward. What all this means (I get giddy just describing it) is that as DiCaprio's team move through the multiple levels of their target's dream, each level is interacting – as they sit in a bar on a lower dream-level, they can feel the turbulence of the van they're sleeping in, one dream-level up. It also means that years can pass in the lowest dream level, in the space of real-world seconds. I'll admit, not all of this is crystal-clear enough to be totally satisfying, and there are some really disappointing omissions (if these people are lucid dreaming, why can't they fly? Or at least do some neat tricks?). But the last hour of the movie still manages to be one of the most amazing action sequences I've ever seen – there's simply nothing else like it out there.

Ultimately, what cripples Inception is the emphasis on Leo's love life. In Dark Knight, the emotional and the explody were intertwined (nothing gets to the conceptual heart of Batman like the image of Bats grappling the Joker, fighting his urge to kill). In Inception, while there's an initial promise that the dark enemy within will actually become a violent opponent, we never get the satisfaction of a climactic showdown – a truly massive blunder. I can imagine a different, probably better movie that ditches the lost-love subplot entirely and focuses on the movie's actual center – the desire of a young man to please his titanic father. Like the movie itself says, the most powerful ideas are the simple ones.
Posted by Unknown at 8:28 AM 1 comment: