How I'm Thinking About Sherlock

I just got back in from seeing the new Sherlock Holmes movie.  It’s a pistol – as a fella I ran into tonight pointed out, Guy Ritchie started making good movies again once he broke up with Madonna.  It also totally taps one of my great preoccupations of late –the Western 19th century.  Pretty broad stroke, I know, but I’m still learning the fine grains of the history.  On my long drive to and from the family homestead for Christmas, I’m listening to two great books – Steven Bown’s Scurvy and Steven Johnson’s The Ghost Map.  These books are about the development of modern science in an age of loose thinking and persistent superstition, the main point of my interest in that broad sweep, and a theme shared with Ritchie’s Victorian brawler.


Sherlock Holmes is, even in this new, more physical adaptation, the very embodiment of reason and logic.  As he demands repeatedly in the film,

Gorilla vs. Bear have posted a rich year-end roundup of material not released on LPs, and it's pretty heavily biased to the year's "new sound" of fuzzy melodica.  Some of this stuff is certainly great, and maybe in a down year it's exactly what we need.  But, even though I love GvsB most of the time, wading through any "best of" list that's as uniform as this is a little disappointing.  I wasn't even particularly paying attention for most of the year, but the year-end rounds have in and of themselves started to wear out my patience.
Posted by Unknown at 8:11 PM No comments:

This is likely an instance of retroactively justifying something that I initially did out of desperation, foolishness, or because of a minor stroke, but . . . the reason I've spent the last six years pursuing a PhD is that I want a life that allows me to write.  As much of an assault on the ego as being on the job market is - as much as I feel threatened by the grim prospect of ending up with a 4/4 teaching load, or some other situation where writing isn't officially part of my job - even these grim scenarios include a quarter of each year spent with no competing responsibilities, in which I can work on the passel of essays on obscure topics knocking around in my head.

After I graduated from college, I made some brief, abortive attempts to become a freelancer for magazines.  I wasn't successful, and part of that was because

ATL RMX: The Weird Get Real

I never totally got why Adult Swim was so involved in putting together great hip hop compilations - but it's apparently somewhere in their mandate.  This new ATL RMX album has me, as the kids say, open, because it totally hits the sweet spot between gully and weird, with such beautiful train wrecks as Gucci Mane remixed by Health and Young Jeezy treated by El-P.  It's smart dumb, and it knocks - even the Health track is headnoddable.  Best of all, it's a free download.
Posted by Unknown at 2:33 PM No comments:

School is cancelled today in Iowa.  I can't deny feeling a great thrill.  I've been feeling a bit overwhelmed lately, and work on revising my final two chapters has slowed massively.  Today and tomorrow are revision days!
Posted by Unknown at 6:57 AM No comments:

Second Albums and First Loves: On Infidelity in Stereo 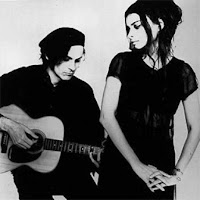 I was driving home today when, god bless ‘em, one of those lovely kids at KRUI jammed Mazzy Star’s “Fade Into You.”  It’s great to know that it’s still hooking ‘em all these years later, because the track meant a lot to me.  I think I first heard it when I was 15, or maybe even younger.  Friendless loser that I was, I spent a lot of Friday nights home, staying up after my parents went to bed, and occasionally catching a late show on CBS which would occasionally play “alternative” music.  One of these times I caught a video for “Fade Into You,” nothing but fuzzed out black and white footage, shakily shot from weird angles, equally blurry, burned-but-beautiful sounds, stuff I’d never heard before, really landmark for me.  I jammed So Tonight That I Might See for years after that.  (You can see the video here - it’s extremely weird for me to watch it now, all these years later, resonances of a person I barely remember being).


But when I picked up their followup, Among My Swan, I was massively indifferent.