Evil's Advocate: Why Nike's Miyashita Park is a Good Thing

I consider myself a leftist, but there are a lot of pieties and givens on the left that I don't quite swallow whole.  In fact, I sometimes find myself sketching positions that are at least contrarian, if not retrograde.  The thing is, I wish someone would convince me that I'm wrong about these fleeting hints of conservatism.  This is the first installment of a new occasional series, Evil's Advocate, in which I invite friends of the blog to tell me exactly why my thought crimes against progressive ideology are misguided.

After years of organized opposition to its extensive reconstruction, Shibuya's Miyashita Park has finally re-opened.  It's a tiny strip of elevated land parallel to JR Shibuya station.  Prior to the renovations, the park was a typically depressing Japanese park, not much but packed dirt, some playground equipment so dilapidated I wouldn't let any child of mine within ten yards of it, and about two dozen permanent homeless residents.  Now, it has become . . . this: 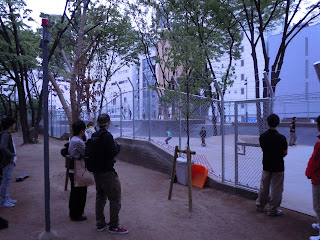 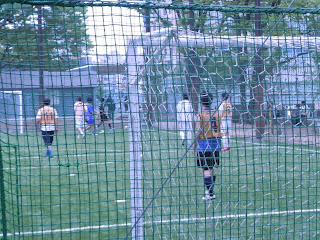 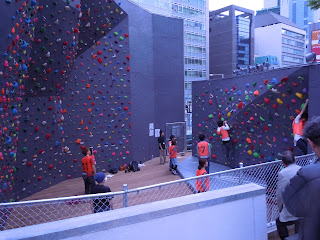 So, how could this transformation from moribund and dreary to active and useful be a bad thing?  The root problem for hundreds of activists who have spent a lot of energy opposing the changes seems to have been that they're all planned and executed, not by Shibuya City, but by Nike.  Initially, Nike was to pay the city a large sum of money each year for a decade for the right to officially rename it "Miyashita Nike Park."  Through demonstrations and direct action, the activists seem to have successfully stopped the renaming - when I went yesterday, there was no Nike branding on any signage, all of which simply said "Miyashita Park."  Even though this seems to have been the activists' only real victory, it's not a small one - for park users and residents to have it constantly shoved in their faces that Nike had essentially taken over a public park would have certainly had insidious long-term effects on whatever slim awareness of the idea of public space may remain in Tokyo.

But without the imposition of corporate ownership, what impact does this reconstruction have on the idea of public space?  In the pictures above, you'll see a healthy mix of people of all ages enjoying themselves, and most importantly, interacting outside of the confines of traditional work or school settings.  It may not be explicitly politicized, but as anyone who lives in Tokyo can tell you, this is still deeply political.  People from different walks of life are almost never brought together in relatively unstructured play environments, and it seems certain that the new Miyashita Park will act to strengthen social ties among area residents.

And the place truly is accessible to all.  There are fees for using the facilities, but they're almost nominal: 200 yen for skating and 350 for climbing, about $2.50 and $4.50 U.S. respectively.  Futsal court rental runs from 4000 to 6000 yen per hour, but with two sides of five players, that breaks down to about 600 yen, or seven dollars, per player.  Especially in Tokyo, these are truly trivial amounts of money, just enough, I would say, to guarantee that those using the facilities will take some responsibility.

A second major issue for the activists was the forcible ejection of the homeless during construction of the park, and the suspicion that they would not be welcome in a new, corporate-sponsored park.  (This complaint might be hard to understand from an American perspective, but here in Japan it's quite common for homeless residents in parks to be tacitly or even explicitly tolerated by authorities).  I have mixed feelings about anti-camping laws: at least in the U.S., many homeless people truly need help, either with mental illness or substance abuse, to the extent that they're dangers to themselves and others.  This seems to be slightly less true in Japan, mainly due to stronger familial safety nets, but it's nonetheless the case, particularly in a space as small as Miyashita, that campers made the park less usable for other people.  In other words, homeless or not, they were using more than their share of a public resource, and using it in a way that interfered with others' enjoyment of it.  While for the homeless, living in the park is probably nicer than being in a homeless shelter, I think that in this case it wasn't fair to the general public, and the park is now a greater public good.

Finally, activists objected, over and above the naming issue, to corporate control of the park.  This is where I am likely to really clash with some of my friends - I think that it's great that Nike took the initiative to make this space more usable.  This is especially true since, generally speaking, Tokyo's wards and the Japanese government are extremely bad at maintaining parks.  Their manufacturing practices may be traditionally abhorrent, but Nike as an entity and a culture clearly has a far better sense of what people want to do for fun than anyone in any branch of Tokyo's metropolitan government, most of whose idea of fun is probably getting shitfaced in a no-panties hostess bar and charging it to public accounts.  Japanese people have a huge love of outdoor activity, and cultivate it despite the almost uniformly lackluster provisions for things like soccer in Tokyo's public parks.  If it takes a corporation to come in and do a better job, then so be it.

Just to reiterate, whatever good I think has come of this, the role of the activists was crucial.  Everything good about the new Miyashita Park would have been rendered bitter and destructive by having Nike's name plastered all over it, and it's hard to say what the park might have ultimately looked like without their pressure.  But now that it's quite literally a fait accompli, it's not fair to hold a grudge and completely deny the possibility that something good resulted.  After all, I'm willing to bet some of those protesters like to skate.
Posted by Unknown at 6:53 PM